Do you like working on printable Bible crossword puzzles? They're lots of fun and great for Bible club or other gatherings. Be sure to check out lots of other Bible crosswords while you're here.

On this puzzle, test your knowledge about the Apostle Paul. We used the New International Version of the Bible when writing our clues. 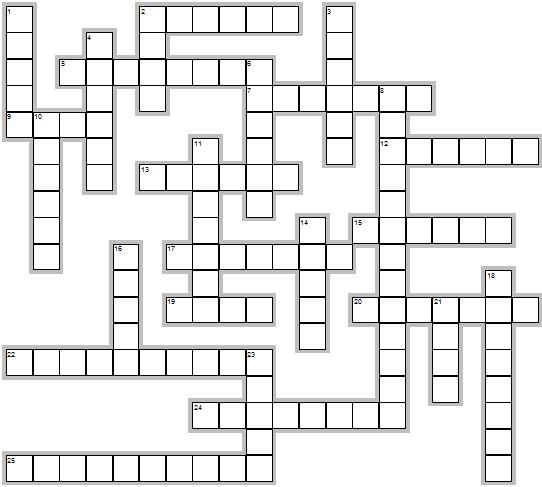 2. City Paul visited that had an idol to the 'unknown god'
5. Where Paul was headed when struck by the bright light
7. The congregation in this city was made sorrowful by one of Paul's letters
9. Paul's first name before he converted to Christianity
12. Sorcerer struck by blindness at Paul's command
13. Paul stopped the Philippian ____ from killing himself.
15. Paul's hometown
17. Paul, before conversion, attended the stoning of this man
19. Paul was here when he was warned not to go to Jerusalem
20. Man who place his hands on Paul's eyes
22. Paul found 12 disciples in Ephesus who had not heard of the __ __.
24. He presented Paul to the disciples the first time
25. Event that loosened Paul and Silas's prison chains

1. Paul left him in Crete to straighten out what was unfinished
2. What man did Paul say was the pattern of one to come?
3. Centurion who took Paul as a prisoner to Rome
4. Roman ruler who refused to hear the complaint of Jewish leaders against Paul
6. What fell from Paul's eyes when his vision was restored
8. Paul called this group his "glory and joy."
10. Paul was accompanied by Priscilla and this person from Corinth to Syria
11. Believer who was circumcised by Paul
14. This Roman ruler sent for Paul so that he could hear about Paul's faith in Christ
16. The voice Paul heard in his vision came from __.
18. After Paul's sight was restored, he was ___.
21. Paul's conversion is told in this chapter of Acts
23. Number of days Paul was blind after seeing the vision

Characters in the Gospels Can you remember the names of these important people from the first four books of the New Testament? Great for Bible classes of all ages. Noah's Ark Bible Crossword Can you answer all these clues on one of the most famous events in the Bible? It's one of our most popular printable Bible crossword puzzles!

The Story of Esther One of the most remarkable women in the Bible, the wise and beautiful Queen Esther, is the centerpiece of this interesting crossword puzzle.

The "Third" Bible Trivia Quiz - Here's a unique set of questions all about things that came not first, not second, but THIRD. Are you up to this challenge?

Who Said It? - Can you identify the speaker and the listener in each of these Bible quotations? This makes a great game, or you can solve it on your own!