Printable word jumbles are a fun game for everyone. We have medium to difficult ones for adults, as well as a whole section of easier free word scrambles for kids. You'll notice our word games cover a wide variety of topics. You're sure to find something you like!

This puzzle is quite unique! Here are the directions.

Here's a peek at the printable page: 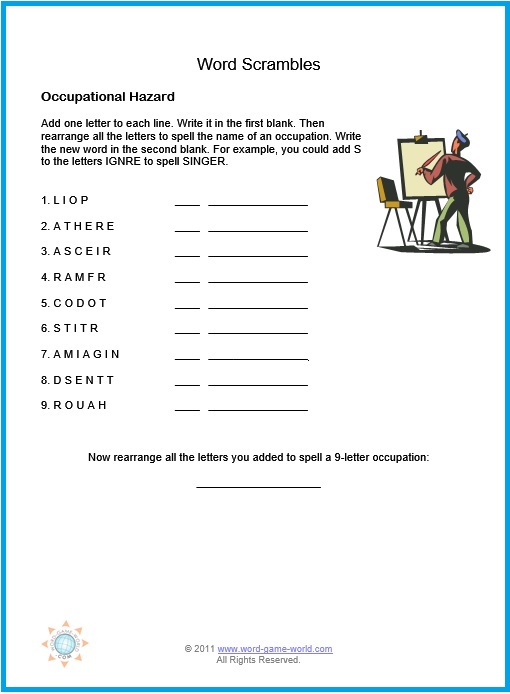 Now rearrange all the letters you added to spell a 9-letter occupation:

You can also print the answers here.

You may also enjoy solving these printable word jumbles:

Fruit and Veggie Frenzy Start with a common word. Add one letter. Rearrange to spell the name of a fruit or vegetable. Healthy fun!

Delicious Dessert Word Scramble: Try this dessert scramble. Get comfortable and grab your favorite beverage and dessert and enjoy. Print off right from your computer.

Triangulair Scramble Word Games Can you beat our scores on this challenging, unique word scramble? Make words of four letters, and one ten-letter word from the letters in each triangle. Fun! Honeymoon Word Scramble What does every bride need to take with her on that special trip? Play this at your next bridal shower for lots of fun!

Baby Shower Word Scrambles for your next baby shower. We have several from which to choose.

Did you know? Anagrams are a special type of word scrambles. In an anagram the scrambled letters spell words. They're a ton of fun and we have lots of unique ones for you to try!