TV crossword puzzles are fun to solve during commercial breaks of your favorite shows, over lunch, or anytime. This is a simple one that shouldn't take long at all!

If you're interested in more challenging crosswords, try some of these from our collection of difficult crossword puzzles.


In this crossword, you need to complete the titles of 20 shows that currently air, or have aired in the past few years, on FOX. Here's a peek at the printable page. Clues are also shown below. 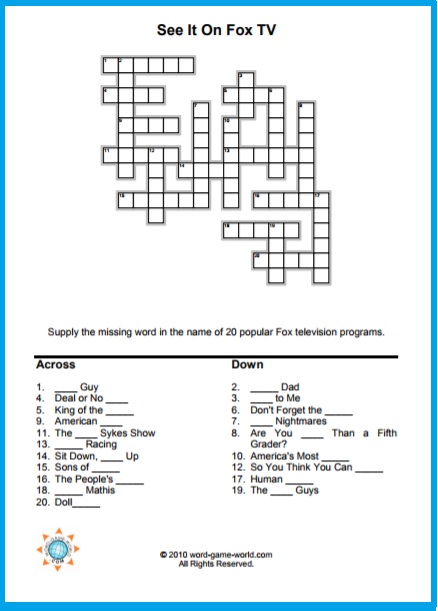 Famous Duos - Do you know the other part of this famous duo? It's Skipper and ??? Complete over 40 more well-known duos from TV shows, cartoons, music, history, and more. Fun to solve on your own or with a friend!

TV Game Show Hosts - How many game shows do you remember? This list goes all the way back to the 1950's. I supply the name of the game and the first name of one of the hosts. You supply the last name. How long will it take you complete this nostalgic puzzle?

You may also want to print crossword puzzles from this assortment:

Celebrity Crossword Puzzles - Use the clues to find the names of famous actors and actresses.

Music Crossword Puzzle - All about Elvis!

Songs of the Seventies - How much do you know about these classic hit songs?

Find more Crosswords for Kids on my other website! If you like TV crossword puzzles, you may also enjoy types of word games from the entertainment world:

Country Music Hall of Fame Inductees - Finish the names of these singer, song-writers and music execs. We've included one name per year for each year since the Hall has been open.

Celebrity Anagrams - Rearrange the letters in each phrase to spell the name of a current celebrity.

Movies from the 1980s Word Scramble - It's all about big hair, big glasses and the Reagan years!

Movies from the 1990s Word Scramble - Leap ahead one decade from the puzzle above as you uncover 20 popular titles from 90s.